Nordic Craft Week 2022 takes place 27 aug - 3 september. Every day during this week each country will share a free knitting pattern for a sweater. This page contains Sweden's contribution. 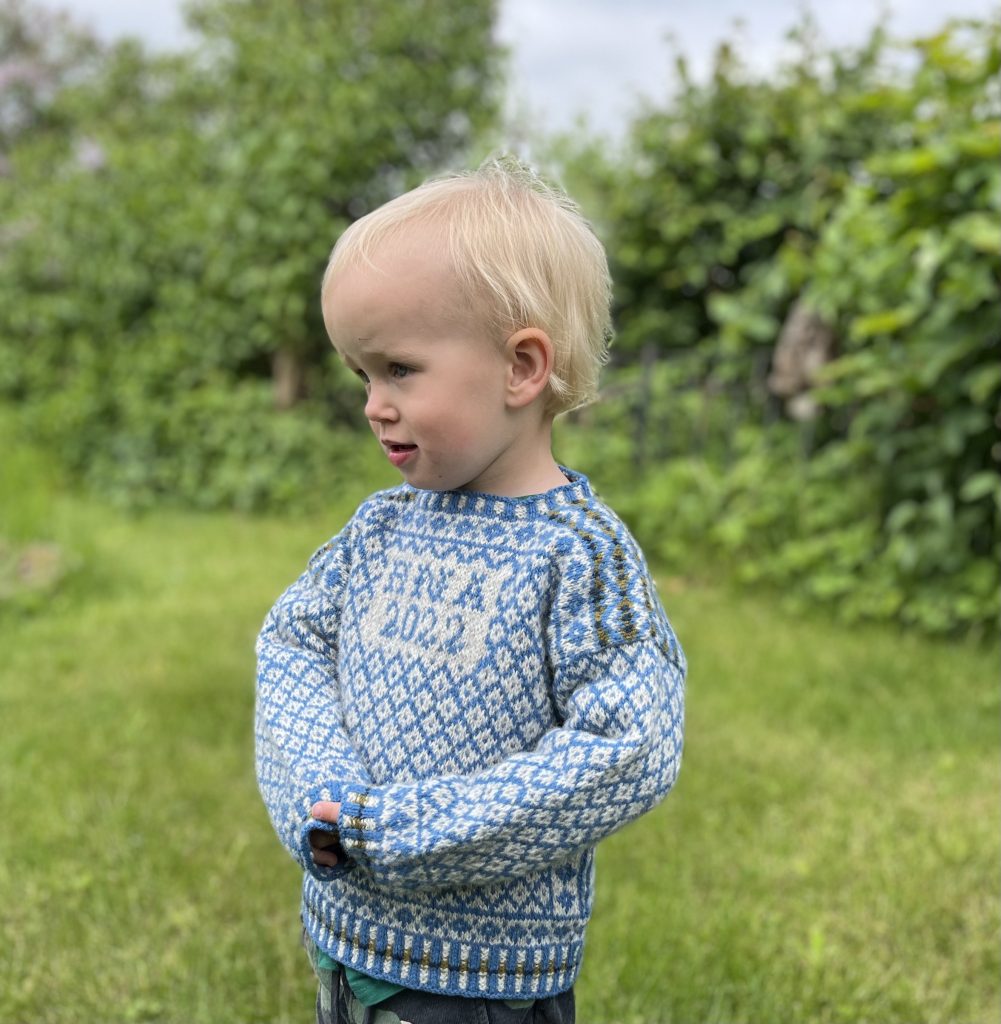 Nordic Craft Week is an annual campaign on Facebook celebrating Nordic handicraft. For a week each autumn the Nordic countries come together to showcase both the unique local variations and our shared cultural heritage. Nordic Craft Week was first held in 2018 and is initiated by the Nordic Folk Art and Craft Federation (NFACF).

The main theme for 2022 is sweaters.  Each country will share a pattern for a sweater – free for everyone to use!

Description and charts are created by Ellinor Nilsson in 2022.

Inspired by the so-called Ullared sweater pattern, examples of this sweater pattern have been found that were knitted in the small village of Sjöö in Ullared parish in the centre of Halland, a county in southwestern Sweden. The sweaters are believed to have been knitted of yarn spun of the local wools using the natural black and white colours of the sheep. After knitting, the garment was dyed red to deepen the black, make it more light fast and also make the sweater able to better withstand stains – they don’t show up as much on red as on white. There are many samples preserved of the sweater for example this sweater at Digitalt museum.

The background motif of the sweater goes further back in history. It has for example been used in an early example of true or double needle knitted sock which is now in the Victoria and Albert museum; this piece was knitted in white and blue cotton yarn made in North Africa (probably Egypt) around 1100-1300 CE.

This sweater can replace a polyester fleece sweater under a shell jacket during spring and autumn. It is a thick, almost windproof garment, that gets better with use.

It is worked in the round from the bottom to the top in one piece using steeks for arm and head openings (binge knitters from Halland work stranded [two coloured] knitting in the round, never flat). Steeks are crocheted, or sewn, and cut. Then shoulders are joined using three needle bind off.

Sleeve stitches are picked up around the armholes. The sleeves are knitted from the shoulders down. A technique often used in rural societies as worn-out cuffs and holes at the elbows could easily be unravelled and reknitted to provide for longer use of the garment. Finally, neck stitches are picked up around the neck opening and a narrow neckband knitted.

This is a very soft yarn suitable for children’s wear as it doesn’t scratch or pill.

Important information before you start

For charts showing the whole body and arms, see full charts further down on the page.

“Row” in the descriptions below refer to these whole body charts mentioned above.

Sections of the charts, showing details are also found further down on the page.

Cast on 204 stitches using German twisted cast on or your preferred method (row 1).

Knit according to charts up to row 71. Front and back are knit together in the round. First back and then front chart around and around.

On row 71 (front) start the monogram. Place markers where the monogram is to start and end. 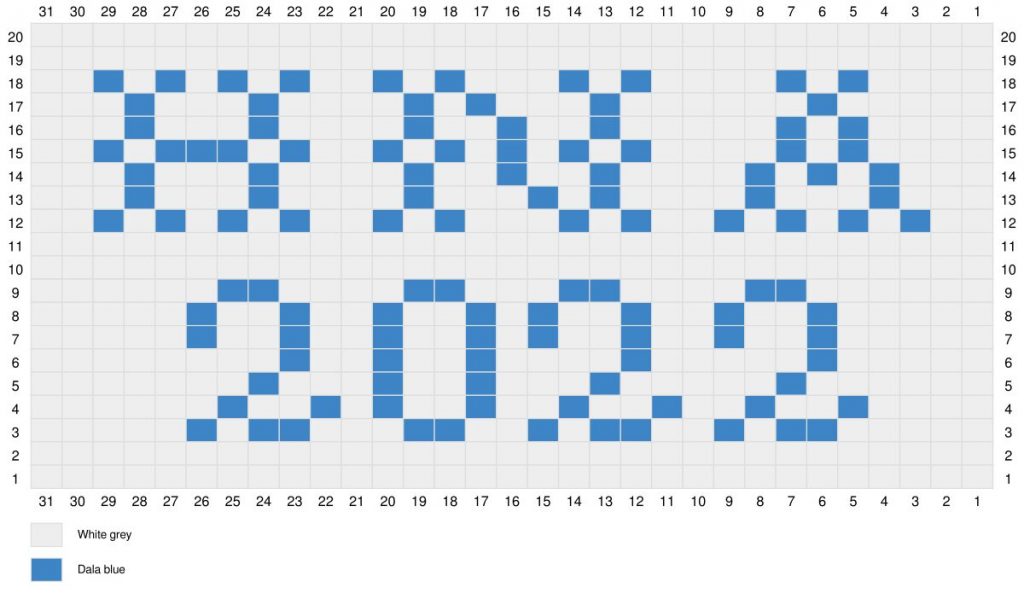 You can sketch your own monogram using any figures or the letters of your preference. My chart is 31 columns and 20 rows. It works well with letters and numbers that are 7 rows high leaving 6 rows in total for spacing on the top, in the middle and at the bottom. You can modify your chart to any width. Just be careful to use an odd number of columns with the red marked centre stitch at the centre.

Bind the blue colour floats on the back so that the monogram doesn’t get all wobbly with the floats hanging loose with the risk of getting caught on something.

Continue knitting to row 104, put the 31 middle stitches of the front on scrap yarn and cast on 7 steek stitches. Knit to row 115. Then a last row 116 on the back section ONLY. Put front and back shoulder stitches on scrap yarn.

Turn work inside out and bind off shoulder stitches using three needle bind off and put the 31 back neck stitches on scrap yarn.

Turn the work again right side out and pick up stitches around arm holes, starting after the three under arm stitches waiting on scrap yarn. Pick up 39 stitches on both the front and the back and pick up an extra stitch on the shoulder seam row, finally, stitch the three scrap yarn stitches and join in the round. A total of 79+3= 82 stitches per arm.

On row 80 when the pattern is finished, decrease every 5th stitch on the preparatory row for corrugated rib to 48 stitches. That is *blue colour knit 1, knit 2 together, with white grey colour knit 2* repeat for the whole row. You now should have 48 stitches for the cuff.

Knit rib according to the chart. Bind off with Icelandic bind off or another method of your preference.

Knit the other arm in the same manner.

Knit 5 rows of corrugated rib *purl 2 white grey, knit 2 blue*. Finish with a blue row before binding off using Icelandic bind off or other preferred method.

Weave in ends and fixate steeks around neck and arms with cross stitches or however you prefer.

The techniques used in this sweater can easily be looked up on the internet and there are several tutorials on YouTube showing each method in detail. I have chosen not to refer to any specific tutorials but leave it to the knitter to find the ones that suit them best.

“Row” in the descriptions above refer to these full body charts below. 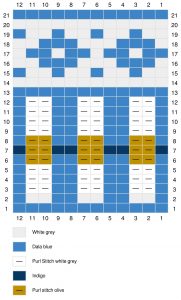 Edge of body and arms 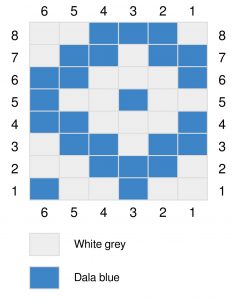 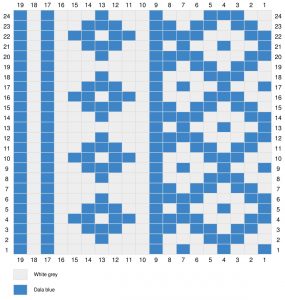 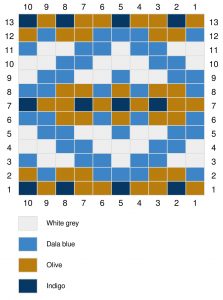 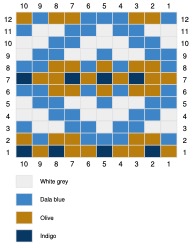 Halland was an impoverished area, the countryside consisted in large parts of heather-covered heaths, the earth, being poor in nutrients, did not produce many crops or much sustenance. Knitting was an important source of income and there is evidence of knitting from the middle of the 17th century. It is said that in 1645 Birgitta van Cracau’s servants, who came from the Netherlands, taught the local workers at Wallens manor to knit. Most probably the technique had been introduced earlier.

The knitting technique was soon well spread allowing anyone with needles and yarn to make extra income. Wool or yarn was provided by entrepreneurs from Borås who would return and collect finished garments to sell in more affluent parts of Sweden. In southern parts of Halland county people were known for their knitting skills and everyone knitted, men, women and children. Children beginning with simpler parts such as sleeves etc. “Binge” is a dialectic word for binding/knitting.

In the beginning of the 20th century employment in the knitting industry was in decline. Berta Borgström, the wife of a doctor in Laholm, saw that the local crofters had difficulties supporting themselves, especially during winter when farm work was scarce. She also noticed the knitting skills among the workers and decided to do something about the situation. She contacted companies such as Militärt Ekipering AB (MEA) in Stockholm and received orders for socks and mittens for the military and also other sports garments for men and women.

As a part of this work she collected, categorized and documented local knitting patterns that were widely used in the region. In 1907 she  founded “Föreningen Bindslöjden” and the business developed so much that knitted goods in traditional patterns were sold far and wide, not only in Stockholm, but also in London, Berlin and around seaside resorts on the Swedish west coast.

The knitters’ skills were encouraged, payment,  knitting charts, and colours standardized. This business prospered until after WWII but the cost of hand labour soon became too expensive. In the 1950’s the handicraft shops in Halland started selling yarn kits to hobby knitters for binge garments, providing the knitter with fitting and assembly of the knitted pieces into ready to wear jackets etc. This service stopped and the handicraft shop in Halmstad was closed in 2011; subsequently the old patterns were sold to Hallands konstmuseum (art museum) and placed in their archives.

Today binge knitting patterns have seen a small revival in groups of knitters exploring the old patterns creatively without the conservative restraints of choice of colour, models and yarn that were present during the time that binge knitting was an industry and controlled by Bindslöjden. The group called “Kreativt binge” was founded two years ago by Halmstad’s Handicraft society. You can follow and contribute to this tradition by tagging your binge garments with #kreativtbinge on Instagram.

There is also a group at Våxtorps hembygdsförening that regularly meet to knit traditional garments in binge patterns.

If you want further knowledge about the Binge tradition Halmstad’s Handicraft society has published a small leaflet called ‘Mittens and Caps’ containing more history and also a few patterns with traditional motives.

For Swedish readers the society has published a small book for beginner binge knitters called ‘Sticka binge. Börja mönstersticka halländskt binge‘, which can be bought on the internet and in book shops.

Back to top of the page